DSA  Asks For Clarity And Support To Unlock Jobs During Ministerial Visit.

Doncaster Sheffield Airport is one of many aviation organisations pivoting its core business in response to the coronavirus, delivering essential supplies such as perishables, medical supplies and providing a rapid response to deliver critical Personal Protective Equipment (PPE) to the NHS frontline.

Ideal Medical Solutions (IMS), a UK distributor that specialises in supplying surgical equipment to medical and surgical professions used its industry base relationships to source large volumes of high-quality PPE from China. Global supply chain manager Ligentia has changed focus from retail to manage its transport to the UK, chartering freight flights to land and offload at Doncaster Sheffield Airport (DSA). Each of the organisations have changed the focus of their business plan to adapt rapidly to the current crisis, working together to deliver high quality PPE to NHS front-line staff.

In February, the airport was ramping up for a bumper season, with long-haul destinations due to take off for Cancun, Mexico, Sandford, Florida and Cape Verde. The 15th anniversary of Yorkshire’s favourite airport was looking forward to another record-breaking year for passenger numbers as airlines added more passenger seats to existing destinations and a number of new routes.

Fast forward to May and that plan looks quite different, as passenger flights have temporarily ceased, with some passengers flights expected to recommence from the middle of the month, the levels of freight and cargo have doubled from this time last year. The focus is on critical items such as medical equipment, perishables and food, as well as outbound humanitarian aid, such as the supply of solar fridges.

Chris Harcombe, Aviation Development Director, Doncaster Sheffield Airport, said: “Today (Thursday 7 May), we took over 22 tonnes of PPE (over 5 million pieces), sourced by IMS, shipped by Ligentia, landed and disembarked by the cargo and operational team at DSA, some of which will go directly to the NHS frontline.
“Ordinarily, May would be the start of our summer season with passengers setting off on their holiday. The outbreak has halted our passenger operation for the time being, whilst our cargo throughput has doubled from this time last year.

“We’ve handled 5,000 tonnes of freight in six weeks since 15th March across 60 flights. March and April traffic is up 45% against the same period last year and we have over 300 tonnes of PPE scheduled to come through Doncaster Sheffield Airport. We also have over 500 tonnes of perishables coming through every week on its way to supermarket shelves.

“Doncaster Sheffield Airport is extremely proud to be playing its part in the ongoing fight against the Coronavirus. Our operational teams – engineering, fire crew, cargo and air traffic control – are working around the clock to keep freight moving, getting it where it needs to be as quickly as possible.

Andrew Wakeling, CEO of IMS Group of Companies, said: “We have been able to channel our years of expertise, and in-house quality and regulation processes to ensure the PPE we are bringing into the UK meet all relevant standards.
“Our top priority is to protect front line staff and ensure public funds are being used appropriately to source safe and reliable PPE and we are working around the clock with high levels of government to secure future consignments of much need high quality PPE.”

Global supply chain management provider, Ligentia, previously leaned towards well-known retailers such as John Lewis, M&S and New Look. As the coronavirus closed the UK’s high street, Ligentia reshaped its business model to focus on essential areas of supply such as medical equipment and vital PPE.

Dan Gill, COO, Ligentia, said: “We have changed our focus to concentrate on providing support where there is the greatest need. Current projects include over 30 air charter bookings from China with a further 100 expected over the next two months linked to government and large medical organisations, moving PPE goods across the globe. Our head office is based in Yorkshire and we were aware of the freight capacities at Doncaster Sheffield Airport to enable us to deliver to the NHS frontline.”

Game Show ‘In For A Penny’

The game show ‘In For A Penny’ has started to be shown on TV on Saturday evenings – Watch out for the episode that was filmed at DSA.

An extra 74,000 seats will be added as a result including a new long haul route to Cape Verde.

Doncaster Sheffield Airport (DSA) has been rated the best UK airport and in the top ten European airports in a leading global airport passenger service and benchmarking survey for the last year.

ASQ research takes place in airports that service more than half the world’s 7.1 billion annual passengers and is measured at quarterly intervals throughout the year.

DSA scored particularly highly for airport parking, courtesy of its staff and providing a safe and secure environment. Parking facilities have been rated the best across Europe in 2019 with the friendliness of staff a close second.

Ian Smith, Commercial and Passenger Experience Director, Doncaster Sheffield Airport, said: “Scoring so highly and consistently in such a globally reputable survey of our peers is really heartening to see. Our Easy, Friendly, Relaxed approach is having a positive impact on our passengers’ time with us as they embark on their well-earned holidays or business trips.

“This is a very pleasing addition to being voted Best UK Airport by Which? Magazine and Saga members in 2018 and testament to the great levels of customer service from the team at DSA.”

Competition is high in this fast-changing landscape where airports are no longer perceived as just an arrival and departure point but part of a holiday or business trip. Customers expect contemporary airports to offer a wide range of services and airports are recognised as key drivers of social and economic progress in cities and regions across the globe.

This is a new self-park Car Park that is located to the South of the passenger terminal. It is advertised as a 5-6 minute walk from the terminal building and will generally be the airports most competitive price point. Airparks’ customers will park their own vehicles and retain their keys.

Please note that this is a new offering that is only available [year-round] on a pre-booked basis only. Prices start from as little at £39.99 for a one week stay and is only pre-bookable via the DSA website or through the airports partner, Holiday Extras.

Airparks is a recognised and trusted brand throughout the UK with sites at other airports including Glasgow, Birmingham and Luton and fulfils more than 750,000 car parking transactions every year.

At DSA, Airparks is an exciting new Car Park that is being managed by the existing Meet & Greet team. All the entrances and exits are operated by a brand-new, state of art ANPR (Automated Number Plate Recognition) system which is monitored and looked after by the Meet & Greet Reception Team. The entire system is ’ticketless’ and incredibly easy to use.

“Doncaster Sheffield Airport is forecasting record passenger numbers for the year ahead, over 15% growth. It will be the airports busiest year on record since opening in 2005. With an additional 250,000 seats already on sale and 11 new routes launched in the past year, passengers numbers will soar to in excess of 1.4m making it one of the fastest growing airports in the UK in recent years.

With the launch of our new long-haul services with TUI to Sanford Florida just weeks away we are extremely optimistic about growth in the year ahead and beyond.”

YORKSHIRE: Intensive police aviation flying is about to commence out of Doncaster Sheffield Airport.
Anyone with ideas about fleets of twin engine yellow and blue surveillance aircraft leaping into action will have their hopes instantly dashed, however.
South Yorkshire Police based in Sheffield are meeting their own expectations on air support by joining the rest of the country in setting up a drone section. Led by the Airport Policing Group at Doncaster, the project started with the acquisition of two drones last year, specifically to provide flexible coverage of Doncaster Sheffield Airport’s airfield in the event of an incident.
Funding has now been approved by senior officers to expand the force’s fleet of drones from two to eight operational aircraft, which will be deployed routinely for a variety of operations beyond the fences surrounding the airfield. They made a case for investing in further aircraft, so that they can be used more routinely across South Yorkshire.
Operational Support Unit Inspector Martin Rodgers has supported the project: “Whilst we will still be working closely with our colleagues at NPAS (National Police Air Service) for certain operations, adding this resource will mean we can respond more quickly and spontaneously to incidents.”
As well as increasing the number of aircraft, 20 officers from across the force will undergo extensive pilot training in line with Civil Aviation Authority regulations. Once training has been completed, the force will have 24/7 drone coverage and aircraft will be able to be deployed to help officers with a variety of operations including search operations; major incidents, crowd monitoring and proactive operations.

Many thanks to all the FODSA Airport Ambassadors who help play a part in achieving these fantastic awards.

A further expansion of the growing commercial district at Aero Centre Yorkshire, the 1,600 acre site around Doncaster Sheffield Airport (DSA) has today been given the green light by Doncaster Council.

The expansion will see up to 600,000sq ft. of office, general industry, storage and distribution space developed with the potential to create up to 800 jobs for the local area. 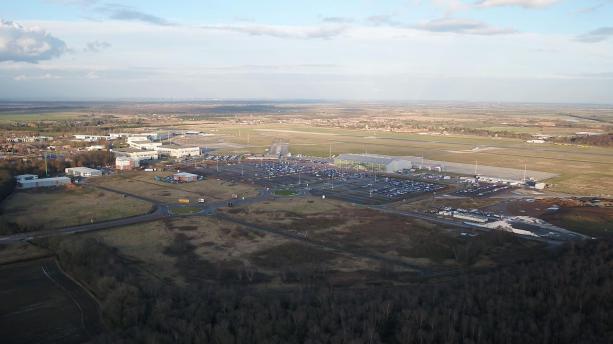 The news follows the recent launch of the airport Vision Plan and is set to become a major catalyst for Northern prosperity, international connectivity and for attracting investment into the region.

The site could be made further accessible by public transport from surrounding towns and cities with the addition of the proposed East Coast Mainline link to the airport, which could be in place by 2024.

Peel Land and Property, part of the Peel Group who also own the airport, anticipate strong interest in the fully-serviced site and will open discussions with developers and owner occupiers seeking commercial development land opportunities on a prime, well-connected site, with significant growth potential.

With the new permission secured, the scheme will drive forward inward investment for Doncaster and prove instrumental to the continued delivery of the wider ambitions for Aero Centre Yorkshire.

The scheme also reflects the Sheffield City Region Local Enterprise Partnership’s (LEP) strategic plans identifying Aero Centre Yorkshire as one of its top priority growth locations and as a driver for inward investment and job creation with regard to logistics, engineering, aviation, energy and construction.

Andrew Farrer, Development Manager from Peel Land and Property said: “Aero Centre Yorkshire’s wider development will build on the success of the DSA which has seen significant growth in recent times. The application has been prepared to reflect the rapid growth in the cargo and logistics market at DSA, helped by the improved accessibility provided by Great Yorkshire Way as well as its location within a national logistics hot spot between the Humber ports and the motorway network.”

Y is for Yorkshire:

Doncaster and Yorkshire have gained a new landmark after an impressive public art feature was installed to commemorate the imminent completion of the Great Yorkshire Way airport link road.

A Northern Vision for a Connected National Economy

Airport regains title of fastest growing airport in the UK.

This is Aero Centre Yorkshire:

#FlyDSA – Warmth And Hospitality Is What Doncaster Sheffield Airport Does Best:

Best Year Ever At DSA…

Rail links put us on right lines for aviation’s success:

Jayne Dowle: World’s on our doorstep if we let airport fly high.

YP Comment: An airport with a sky-high ambition – Doncaster leads by example.