Competition closes October 2020, and entries to be handed in at the November 2020 meeting. Guest speaker to judge entries.

Filming took place in the Terminal building around the check-in desks for the game show ‘In for a Penny’, with host Stephen Mulhern taking time-out for a photo shoot.

Once again it was an early start for the FODSA Airport Ambassadors as they all gathered at 05:00hrs on the morning of 30th June in the Terminal building at DSA. 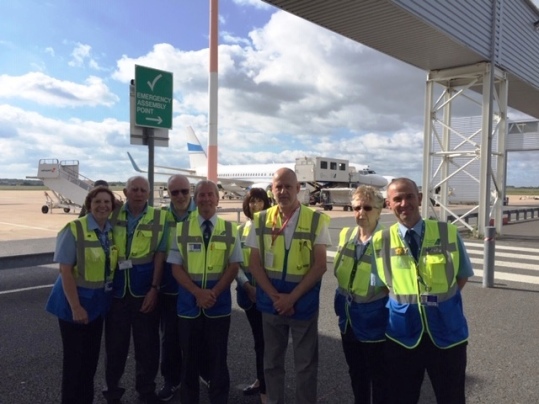 FODSA’s role on the day is to assist the airport with the yearly Hallam Diocese Pilgrimage to Lourdes, and aim for a stress free and as pleasant a journey through the airport as possible for all passengers.

It was an early start once again for the FODSA Airport Ambassadors, who were at the airport at 05:00hrs Sunday 1st July to assist with the passengers for the Hallam Lourdes Pilgrimage departure. 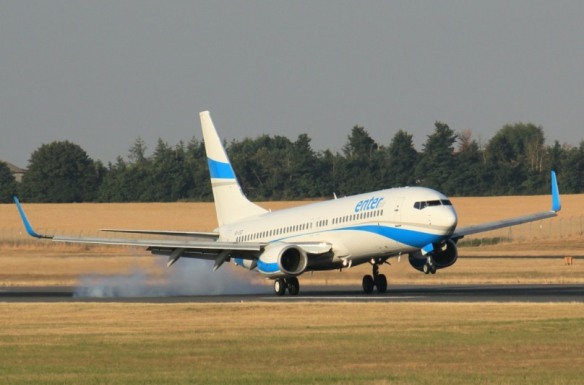 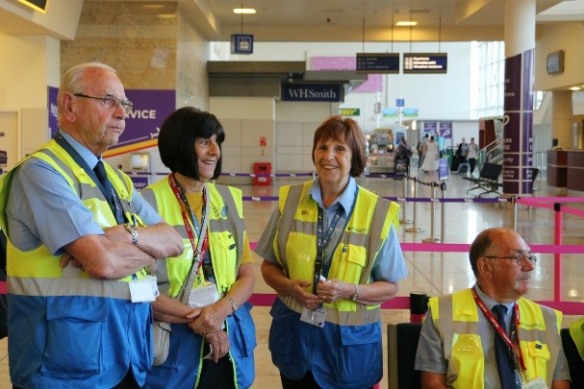 Their return flight, Friday 6th July, was delayed by well over an hour, but all were safely away home from the airport by 22:00hrs. 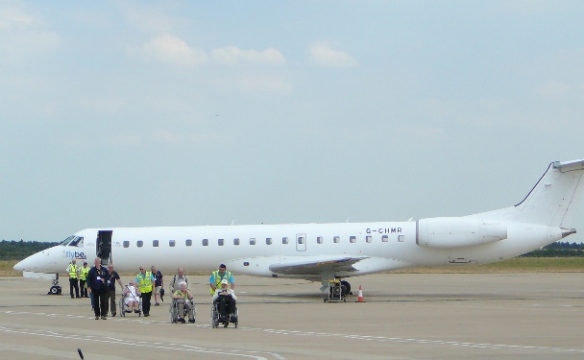 A Big Thank You to all the FODSA volunteers who helped raise £937.92p for the Yorkshire Air Ambulance during the World Duty Free Xmas Sale 2017 at the Airport.

Thank you once again to all who took part.

Paul Hudson – ‘Paul the Weather Man’ BBC Look North, chose to fly out from Doncaster Sheffield Airport today 14th August 2017. Paul was very kind and agreed to have his photograph taken with one of the FODSA Airport Ambassadors. Hope the weather is good for him…

Before jetting off on his jollies, Mr Roy Chubby Brown took time out to pose with two of our Airport Ambassadors Pete and Ken, along with Mr. Walker from security.

John gave an excellent presentation and insight that was enjoyed by all present; which was made all the interesting by Johns experience and knowledge.

‘Raising A Glass’ For The Airport’s 12th Birthday:

FODSA members gathered at the Ramada Airport Hotel on Friday evening 28th April 2017 to ‘raise a glass’ in celebration of the Airport’s 12th Birthday. 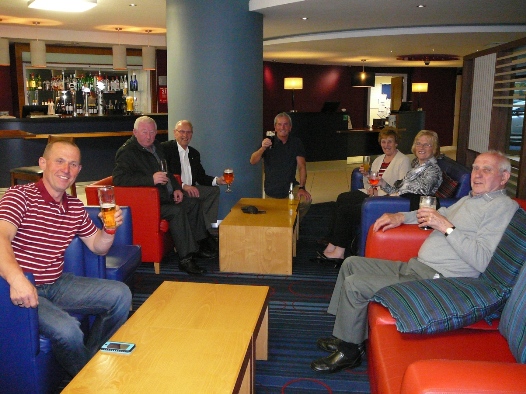 On 28th April 2005 Thomson flight TOM 521 departed 09:15hrs to Majorca from DSA, with pilot Paul Rafferty at the controls, and Melvyn Wildman being the first person to have booked a seat for the flight.

Doncaster Sheffield Airport is now the fastest growing Airport in the North.

During the summer months members of FODSA are out’ n about visiting local shows, gala’s and fete’s, setting up their stall to support and promote DSA, FODSA, and to raise money for their chosen charity, the Yorkshire Air Ambulance.

A presentation took place at Doncaster Sheffield Airport, and a cheque for £3,300 was handed over to Charlie Pearson, South Yorkshire Community Fundraiser, by FODSA chairman Andrew Bosmans with FODSA members looking on.

When Emmerdale Came To DSA:

FODSA members assisted airport staff with the recent filming of a scene from the very popular TV soap Emmerdale. Film crews and cast were on site for a full two days filming. 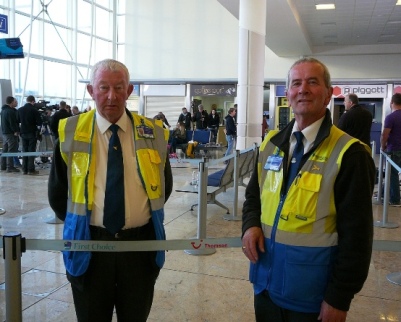 So Kind And Generous were the public and staff at the WDF Sale 2016, FODSA raised over £1200 for the Yorkshire Air Ambulance – Thank You All. Special thanks to Eric for his kind and generous raffle prize donation.

Meet the FODSA Airport Ambassador team who will be on hand to offer a warm, friendly and cheerful welcome to passengers, guests and visitors throughout the year. They will ensure passengers have a stress free and as pleasurable journey through the airport as possible.

Paul Maddison, vice chairman of FoDSA said: “We are delighted to be able to provide this service to all passengers and visitors whether it is just to greet them as they come and go or to provide help to those who require advice or assistance.

“The twelve dedicated volunteer Airport Ambassadors are enthusiastic, energetic and passionate, they cover the busiest periods at the airport and work with airport staff to make a difference. ” We help and assist passengers with queries no matter how big or small. It can be anything from giving directions within the airport, directing to the correct check-in desk, making sure they know what items cannot go in their hand luggage – the list is endless. “We’ve even assisted people who’ve arrived on the wrong day of travel, turned up at the wrong airport or forgotten their passport!”

The volunteer Airport Ambassadors provide a special role at Doncaster Sheffield Airport and invest their time to help reassure any anxious passengers and provide a warm, friendly and cheerful welcome to everyone visiting the airport. Steve Gill, managing director of Robin Hood Airport Doncaster Sheffield, said: “FoDSA have provided great support to the airport for many years and these new ambassadors will help our passengers have a stress free and as pleasant a journey. “We are very lucky that so many people volunteer their time and passion through FoDSA to help the airport in so many ways.”

This years event took place at Aspire Premier Events Venue in the heart of Leeds.

The evening consisted of a drinks reception, followed by a 3 course meal and finishes with the Recognition Awards Ceremony. The evening, as always, is organised to acknowledge the hard work and efforts of the charity’s volunteers, fundraisers, corporate sponsors and local media organisations who have helped raise awareness and funds for the Yorkshire Air Ambulance. The Yorkshire Air Ambulance has been the chosen charity of FODSA for a number of years now, and members raise funds at different functions throughout the year whilst supporting and promoting Robin Hood Airport. Mr. Andrew Bosmans, chairman of FODSA, attended this year’s Awards Night to receive the Recognition Award on behalf of everyone at FODSA who devoted time and effort to raise money for this worthy cause. Andrew stated that he was so pleased to accept the award and to be able to take it back to the FODSA office at the airport where it would take pride of place. Other fundraisers, volunteers and supporters from across North Yorkshire were also recognised during the evening.

‘The Yorkshire Air Ambulance is an independent Charity providing a life saving rapid response emergency service to 5 million people across Yorkshire. We fly seven days a week, 365 days a year, covering a vast landscape that not only includes major cities and motor ways, but also rural and isolated locations.

To keep providing this life saving service the Charity needs to raise £12,000 per day to keep both of Yorkshire’s Air Ambulances maintained and in the air. The generosity that we receive is the life blood of the Charity and without this generosity, we would not be able to provide the service that we are so proud of’.
_________________

So Kind And Generous were the public and staff at the WDF Sale 2015, FODSA raised over £1100 for the Yorkshire Air Ambulance – Thank You All. The raffle held in support of YAA at the WDF sale for the Jofli Bear was won by Lorraine Gaynor – ticket 412.

August 15th 2015 saw an early start to the weekend for FODSA members when they attended the annual Auckley Show ground to promote the Airport, FODSA and raise funds for their chosen charity ‘The Yorkshire Air Ambulance’.

Many thanks goes out to the Auckley community and wider public for their kind and generous donations.

It was an early start for the FODSA volunteers who assist the airport with the yearly Hallam Diocese Pilgrimage to Lourdes 2015.

Most of the 189 passengers were elderly and infirm who required assistance on arrival at the airport from their coach to check-in , through security into the departure lounge, and onwards to the aircraft.

A couple of the FODSA volunteers with Hallam Diocese representatives before all passengers are boarded ready for take-off.

The flight was due to depart at 08:00hrs and was operated by Transavia, a new airline to operate from DSA.

Hallam Diocese also had their own volunteers and medical staff, and with the cooperation and team work from airport staff and FODSA, all passengers were safely boarded and the flight departed not long after its scheduled flight time.

All safely onboard, and some of the FODSA volunteers were able to wave them off.

A warm welcome awaited FODSA members has they arrived at Hangar 1 on the evening of 3rd June 2015; the hangar being recently refurbished for its new occupants 2Excel Aviation Ltd.

From 2Excel’s conference room within the hangar, Richard and Steve (both Ex RAF) gave an excellent presentation to members which reflected their true professionalism, knowledge and experience.

Richard and Steve started of with a little about themselves and their work history which members found most interesting, following on with an insight in to 2Excel Aviation, from how things started from a small Air Display team of two, to the present day multimillion pound company of around 100 employees.

Members were then given a chance to get up close and personal with a superb tour of G-OSRB 727 aircraft, which had just arrived from RAF Lasham and was parked-up in the hangar.

A fascinating and most enjoyable evening was had by all who attended, and made all the more interesting by Richard and Steve, many thanks to them both.

Fingers crossed, the future is looking bright for 2Ecel Aviation here at DSA; and if the rest of the team are as good as Richard and Steve then watch this space.

To learn more about 2Excel Aviation and all they do, please visit their website www.2excelaviation.com

FODSA Marks The Occasion Of Theirs And The Airports 10th Anniversary:

FODSA celebrated the occasion of their 10th Anniversary at the Ramada Encore Airport Hotel with a fine 3 course meal. Although the group had been together previously know as FLY – Finningley Locals say Yes – it is ten years since being established as Friends of Doncaster Sheffield Airport. 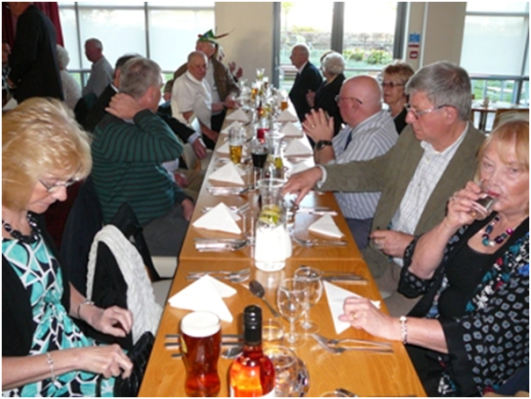 Just some of the members enjoying the 10th Anniversary Celebrations

There were 40 members present to enjoy the evening and a toast was made to ‘Absent Friends’, along with special awards being presented to Doug Bullock and Alf Hall for their long and outstanding contributions to Fly & FODSA.

Honorary membership being awarded to Doug and Alf by FODSA chairman Andrew Bosmans.

DJ and TV Presenter Flies Out From DSA:

DJ and TV presenter Chris Evans chose to travel up from London by train so that he could fly out to the Isle of Man from Robin Hood Airport. 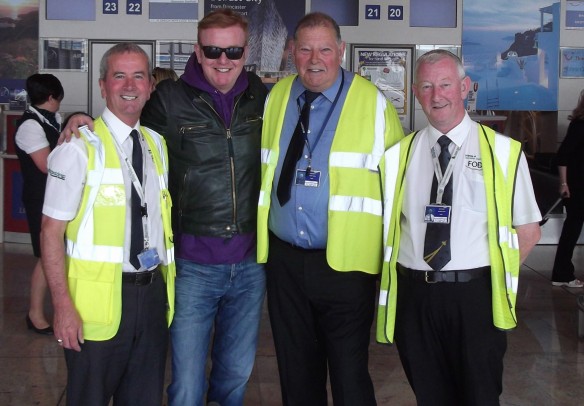 FODSA members with Chris Evans before he flew out to the Isle of Man with LinksAir.

Before his flight was due to depart, and Chris being a big fan of the last remaining flying Vulcan in the world, he took a quick visit to see XH558 in her hangar at the airport.

Chris flew out from DSA with LinksAir to join his TV presenter and co-host Alex Jones to present the BBC One Show live from the IOM. The show was promoting and following the baton for the Commonwealth Games.

…and the surprises did not end there, a further amazing, historical and beautiful piece of art work showing a hawk and two BAe Hawks could be found on one of the upper rear office walls.

All of this astonishing art work dates back to the old RAF Finningley days.

Not sure of any precise dates, but the chequered yellow and blue squares may well belong to 100 Sqdn.

The chequered squares are the same colour as the starboard inner engine nacelle of B17 ‘Sally B’ which is based at Duxford, Cambridgeshire.

The two Hawks depicted are believed not from 100 Sqdn but possibly from 6FTS which shared the hangar with 100 Sqdn.

100 Sqdn Hawks have Pirate 1 etc under the pilots name near the front of the canopy on the port side, this is believed to be their individual call sign.

This photograph of an RAF Hawk jet clearly shows the Skull & Crossbones and the chequered blue and yellow squares.

Not so sure about the Hangar 1 doors but fingers crossed, let’s just hope some of this historical art work can be preserved for the future during refurbishment.

Photos in the Hangar by VCF. (copywrite protected).